Jonny Greer is the 2022 Northern Ireland Rally Champion. The Carryduff man and his Welsh co-driver Dai Roberts led the Carryduff Forklift Down Rally from start to finish last month in their Citroen C3 Rally2. This was the fifth and final round of the McGrady Insurance Motorsport UK Northern Ireland Rally Championship. It was Greer’s third NI title having won last year and also in 2017. Jonny did it in style this year, winning four rounds out of five. His only retirement came on round three, the Maiden City Stages event.

Held over four repeated closed road stages including Bucks Head (8.69 miles) and the classic Hamilton’s Folly (5.64 miles), the County Down event was back to its best following two years of absence dew to covid. Based in the heart of Lisburn City, the joint organisers Rathfriland and Ballynahinch Motor Clubs had attracted a large entry of 112 cars for the rally which doubled up as a round of the Protyre Motorsport UK Asphalt Rally Championship.

BMMC/BRMC members were out in force on the Down Rally covering timekeeping, rescue, radio and stage marshalling on the event. The changeable weather made the rally very challenging. Typical of a summers day in Northern Ireland, we had early morning rain followed by some heavy showers and then rapidly drying warm conditions.

I covered radio at the start of SS1/5 Lougherne and was joined by Janet and Lorraine on arrival control while Goff and Nigel were the start timekeepers. Victor was stage finish radio. No major problems here for both runs and we ran to schedule. In fact all 8 stages ran to time without incident. A total of 77 cars finished.

Damian Toner and Denver Rafferty won the 2WD section on the Down but fellow Escort Mk2 driver Alan Smyth clinched the 2WD Championship. Derek McGarrity finished the rally in sixth place but that was enough to insure runner up position in the overall championship for the eight-times NI Champion. His partner in the VW Polo GTI R5 was Graham Henderson and he won the co-drivers title this year.

Third in the final drivers NI Championship points table fell to Joe McGonigle just ahead of Aaron McLaughlin. They had been in with a shout of the championship but both of them retired from the Down Rally. McLaughlin had a turbo blow at the end of SS1 and McGonigle went off the road on SS2.

Steve Wood was the highest placed of the Protyre Asphalt Championship runners finishing eighth overall in his Fiesta WRC with Kenny Hull on the notes. Former NI Champion Stuart Biggerstaff and Anthony Nestor were seventh in their Fiesta R5.

Aaron McLaughlin entered his Fiesta R5 for the Loughgall Country Park Rally early last month and beat five-time-winner Damien Toner to the victory . It was the first win for a 4WD car in the clubman event. Originally a 2WD-only rally, organisers North Armagh Motor Club opened the single-venue tarmac event to four-wheel-drive cars a few years ago.

Last year the Loughgall event was a round of the COVID-19 hit Northern Ireland Rally Championship. Jonny Greer won then in his Citroen C3 R5. For 2022 the rally returned to its clubman status. As I said Damien Toner had won the previous five clubman years in his trusty Mk.2 Escort.

There were 56 starters of which 45 finished. Toner and co-driver Denver Rafferty set fastest times on the first two of the six stages but McLaughlin and William Neill then took command and the Fiesta was fastest on the final four tests. In the end McLaughlin finished 38 seconds ahead of Toner with the BMW 1M of Martin Toner/Kyle Diffin third.

We were covering radio points and stage marshalling at Loughgall. At my radio point Aaron McLaughlin spun on stage four but was still fastest overall. The rally started behind schedule but made up time later and ran without any major incidents.

Maiden City Motor Club are the organisers of this event. Based as usual at the Shackleton Airfield complex in Ballykelly. We are providing rescue, radio cover and marshals for the single-venue sealed surface event. Sign-on via rallyscore.net

The seventh and final round of the 2022 Irish Tarmac Rally Championship. Based in Newry City and organised by the Northern Ireland Motor Club. BMMC/BRMC members are involved with timekeeping, rescue, marshalling and radio cover on this two-day event. There are three stages on Friday evening from 5pm, Slieve Gullion run twice (the second in darkness) and one run over the classic Bronte Homeland. On Saturday there are three tests run twice; Tyrone’s Ditches, Babylon Hill and Mount Pleasant. ITRC points leader and title favourite Josh Moffett heads the large entry list. Sign-on via rallyscore.net

Magherafelt and District Motor Club are the organisers of this clubman rally. The event takes place over one 7.3 mile stage (80% gravel and 20% tarmac) run three times in the Davagh Forest complex in Co.Tyrone. The rally starts from the sponsors Centra store at Dunman, Cookstown. The service park is in Draperstown. Sign on via rallyscore.net

Enniskillen MC are organising this the second round of the 2022 McGrady Insurance NI Gravel Rally Challenge. Not run since 2019 due to the pandemic, this event usually attracts a large entry. The stages are the usual ones in the Derrygonnelly area of Co.Fermanagh. We are due to provide rescue and radio cover plus other marshalling duties on the day. Sign-on at rallyscore.net 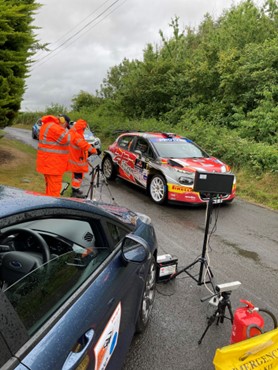 Team BRMC in action preparing to start Jonny Greer/Dai Roberts in their Citroen C3 Rally2 on stage five of the Down Rally. The No.1 crew went on to win the rally and Jonny Greer clinched the 2022 NI Rally Championship.

Rallying as a discipline was given the green light earlier this month, and now Motorsport UK has created a guidance video to help everyone understand the changes we have to undertake. Here is a link to the video:-    ReturnToTheStages

Latest updates from Motorsport UK, the wider motorsport community and the latest from the UK Government..

The latest information can be found here.