The Ulster Automobile Club ran the two-day Easter Stages Rally last month. Round two of the 2018 Irish Tarmac Championship the twelve stage road-closed event was based in Co.Antrim.

BMMC were providing timekeepers, rescue and radio cover as well as stage marshals. As Chief Timekeeper I would like to thank all club members who turned out on both days. Friday was particularly wet but Saturday remained dry if not warm. A disappointing entry of just 57 competitors was tempered by a competitive top ten.

Favourites were the Monaghan Moffett brothers, Josh and Sam seeded one and two respectively. As it turned out they finished first and second with the younger Josh winning by four seconds. While the brothers were in identical Ford Fiesta R5’s, third place went to the Skoda Fabia of Marty McCormack.

Forty five cars finished with day one leader Derek McGarrity’s WRC Subaru failing to restart from overnight parc ferme. Another to retire on Friday was local man Desi Henry when he put his new Fabia off the road. These two were the only major retirements.

The event ran very well with all stages starting on time and no big incidents.

Late last month we turned out to assist Cookstown Motor Club with the running of the Slate Fuels Targa Rally deep in the Co.Tyrone countryside. At least four BMMC members were timekeeping on the seven different short tests. Victor and I were on the stop control of the final test of the three loops, a concrete lane not far from the start venue.

These relatively cheap to enter Targa Rallies are hugely popular in Northern Ireland at the present time and very competitive. Almost all Motor Club’s run at least one per year. Such was the popularity of this event that within around twenty minutes of entries opening on-line the maximum of 90 was reached!

We were extremely lucky on the day. Every other location had heavy rain on the second loop except us. In fact a huge hail shower in nearby Davagh forest caused havoc for most competitors on the various tests within that area. We even had some sunshine although it was pretty cold.

Some 77 cars finished the rally from the 88 starters. Winners were number 12 seeds Christopher Evans (the former Rallycross Champion) and Kevin Fagan in one of the 8 Toyota MR2’s on the entry list. Second were top seeds Eric Patterson/Raymond Donaldson in a Mazda MX5. The MX5 is still the most popular choice of car for NI Targa Rallies. No less than 45 of them were taking part. Third place belonged to the little Nissan Micra of Matthew Mason/Ben McKee.

I have to pay tribute to COC Bob McKeown and Cookstown Motor Club for looking after us marshals. After an early breakfast at the Shepherds Rest pub, Rally HQ and start venue, we were all treated to at hot lunch of Irish Stew or Chicken Curry delivered to us. Then after the final test Bob presented each and every marshal with a lovely Appreciation Award similar to the competitors class winning trophies.

This welcome new innovation by Cookstown MC is perhaps a lesson for other clubs as to how to treat their marshals. Although it was a long day of non-stop action and a 160 mile round trip for me, I for one will definitely be back to any Cookstown organised events in the future. A little thanks goes a long, long way.

Cookstown MC will run another Targa Rally in September. Then they will organise the Tyrone Stages in October. Although a tarmac rally, this the final round of the 2018 Northern Ireland Championship, is due to take place over the private roads around Benone beach on the edge of the Atlantic Ocean in Co.Derry. The Tyrone Stages ran over these tests in 2016 and, although quite short, they proved popular with competitors.

Enniskillen Motor Club are holding this annual single venue event at St. Angelo Airport near Enniskillen. With a bulging entry list of over 100 cars, BMMC have been asked to provide marshals and rescue personnel. Early start ( 8am I think but please check with the organisers if you are going).

Sat. 12th May
“Go” Tour of the Sperrins Rally

Round Two of the Northern Ireland Rally Championship. Organisers Magherafelt and District Motor Club will run this road-closed event based at Meteor Electrical on the Cookstown to Omagh road at Kildress. Six stages are planned in this area of Tyrone. We will be timing and providing radio and rescue cover plus stage marshals. Sponsored by GO petroleum fuels.

Round Three of the NI Championship this event is organised by Newry and District Motor Club. The rally didn’t run last year. Not on closed roads this time, so it’s back to the familiar tarmac forest drive stages of Slieve Gullion and Camlough. We will be providing marshals, rescue and radio cover plus possibly timekeepers. No more details as I write. Check the Newry club’s website nearer the time.

Cookstown Motor Club presented all marshals on their Targa Rally with this unique Appreciation Award. 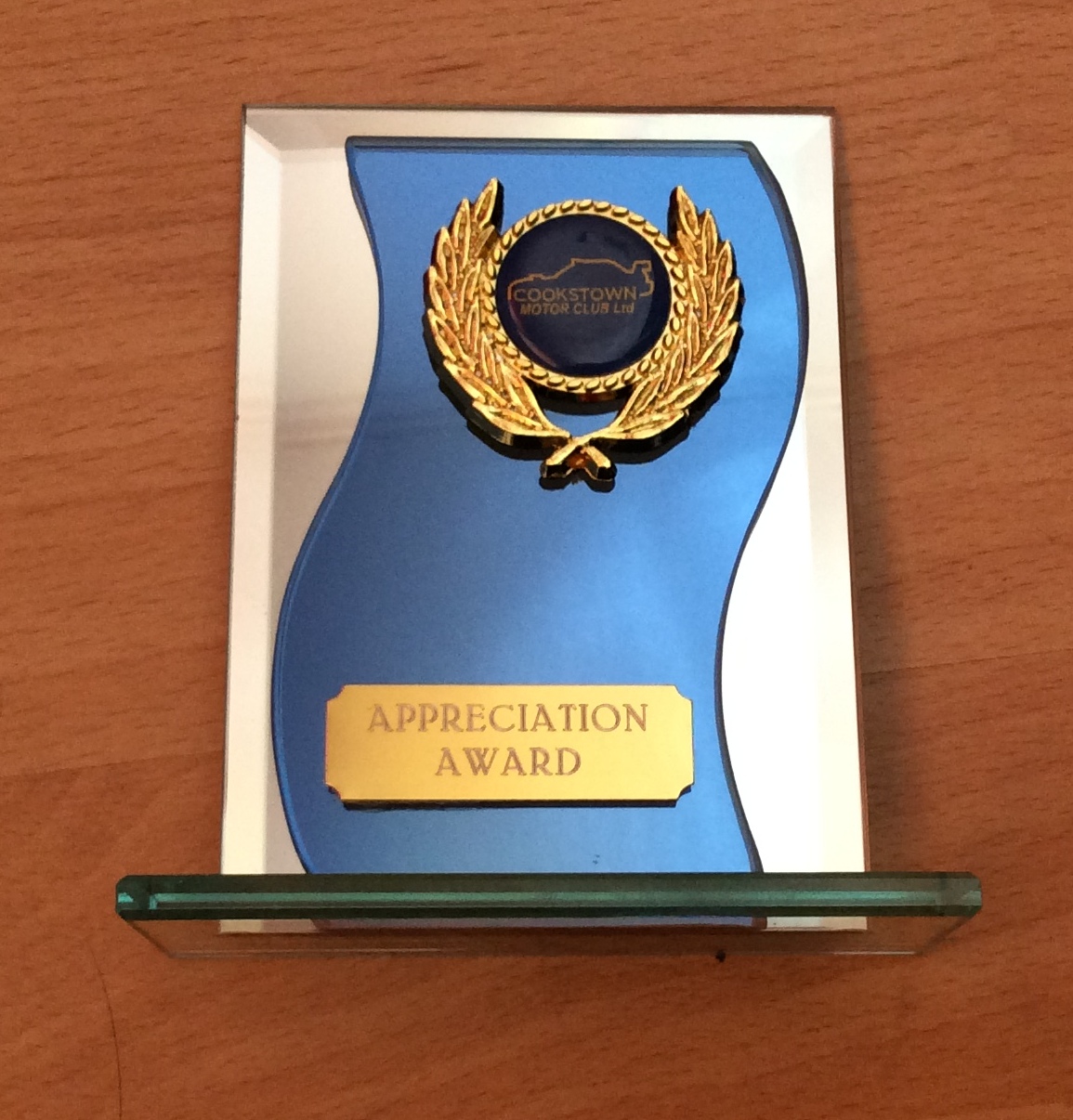